In this lesson, we will look at how the hybrid country scale can be used to solo over major chords in country music.

In country music, major chords are everywhere. There are many ways to deal with these chords, but the end goal is a fluid blend of multiple scales which result in a hybrid country scale consisting of Mixolydian with an added b3 and b5.

With 9 notes available, it would be easy for soloing to descend into a confusing chromatic mess. In reality, this scale is a combination of major pentatonic (E, F#, G#, B, C#) and the minor blues scale (E, G, A, Bb, B, D).

This lick in the style of the great Redd Volkaert is a great example of this blend.

Beginning with a slide from G to G#, the lick then moves into some open position E blues scale with an added double stop on the 2nd fret G and B.

The second half of the lick brings in a major flavor with the use of the 3rd (G#). It’s this blending of the two sounds that helps things sound country, rather than just playing the 9 note scale up and down.

This second example uses the same set of notes, but moves around the neck a bit more, very much in the way Albert Lee might do it.

This is also another great example of the application of CAGED positions. Beginning in the G shape E country scale, the lick slides down to the A shape at the start of bar 2, and then down again to the C shape for the second half of the bar.

Take this lick slowly as the position shifts could easily trip you up. As with all of my content, the secret is having good visualization skills to see the bigger CAGED shapes.

For more content like this, check out my new book, Country Guitar Heroes – 100 Country Licks For Guitar. 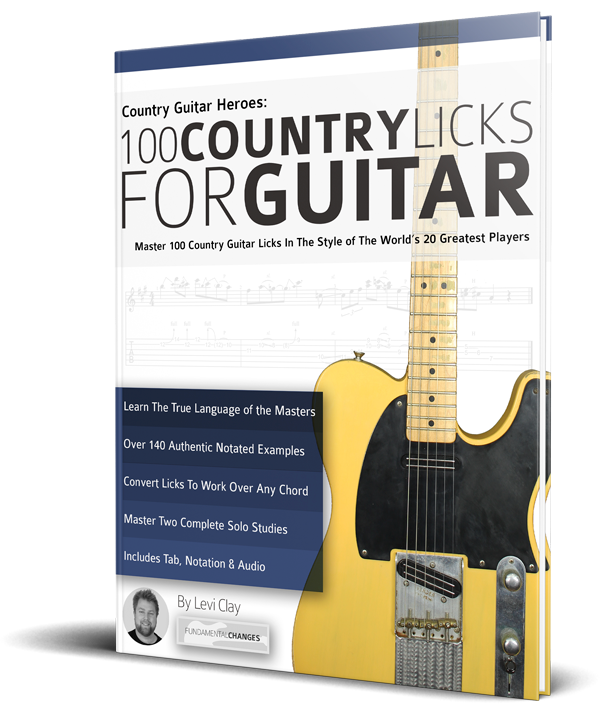 How to Strum Rhythms on Guitar