Today’s lesson will finish our introduction to funk guitar by recapping the main elements seen throughout the course. We will begin with a classic disco-style chord progression in Dm, and apply four different ways to approach playing the chords.

These four ways include a Nile Rodgers style chord trick, triads, double stops and a single note pattern. Remember that the fundamental principle to funk guitar is to provide the backbone groove to any track, only use alterations and tricks as the icing on the cake!

In this example, we use a two finger hammer-on technique on the Dm7 chord. This technique was made famous by the legendary Nile Rodgers. The rest of the progression is the same as in example one with the exception of the slide into the Bbmaj7 at the end of bar four. Make sure you watch the YouTube video to see how I apply a hammer-on technique. 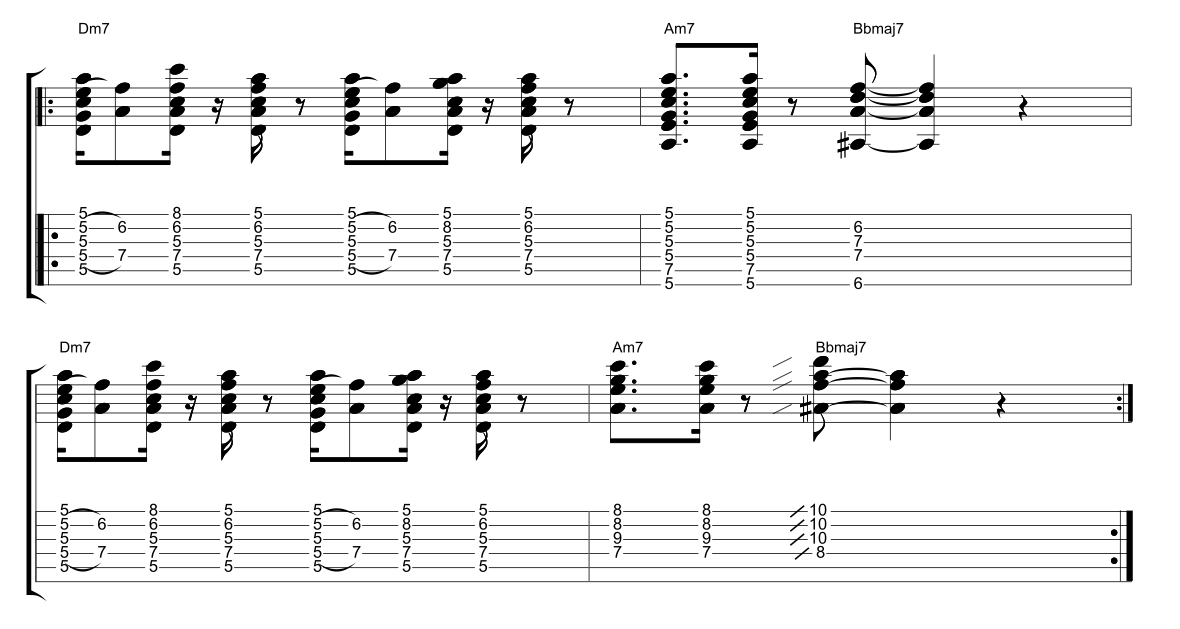 Three note chords or ‘triads’ are a fun way to create funk guitar chord progressions. In example three I took the main chord sequence seen in example one but made each chord into triads shapes based on the top three strings.

In example four I added in some two-note double stops to the same progression. These notes come from the underlying D natural minor scale (D E F G A Bb C). Although this double stop pattern is very straightforward, you can create very complex patterns if necessary.

The final example in this lesson introduces single note fills into our chord sequence. These notes are from the D minor pentatonic scale ( D F G A C) and the D blues scale (D F G Ab A C). Try applying these ideas to your funk guitar chord progressions. Remember rhythm guitar never needs to be boring!

For classic Funk Guitar licks, I recommend buying the album “Nile Rodgers Presents – The Chic Organization.” My favourite track on that album being “Cut The Cake.”

Hi YouTube, Simon here once again for Fundamental Changes. Today we’re looking at part 10, and the final part to our Introduction to Funk. Let’s go and have a look at some examples of that next.

You’re going to have 6th, nothing, 7-7-6, nothing, then a 2nd time through. We’ve got the same last 2 chords, the A minor 7 and the B flat major 7, but up an octave on your 4th string root there, which is rather nice.

That’s your main sequence there, nice and relaxed, and then we’re going to look at some different chord alterations, triads, double stops, and single note popping ideas after this.

We’ve got our very simple sequence that we looked at in Example 1, and now we’re adding in a little bit of Nile Rodgers-style flair.

The A minor 7 and the B flat the same, and the same little D minor 7 riff there, and then the A minor 7, and then sliding in 1 fret below the B flat major 7 there. So, showing a little bit more flair around that D minor 7 chord, showing you that you can mix up your chord sequences quite quickly.

Let’s look at the next example.

Again we’ve got our D minor 7 – our same pattern going on – then we start these little double stops on the D minor. We’ve got 5 on the 3 or the G, 6 on 2 or the B, and then we’re moving that up 2 frets in the 7-8, and back A minor 7 as normal, B flat major 7. Then we come back to the D minor, we’ve got the top 2 strings 6 and 8, 8-10-8 there. We’re filling up the notes of the scale using double stops in D minor, and then the same little part coming up the neck here that we’ve had all the way through, and then the final thing we’ve got 10 and 12, 10 and 13. Little mini double stop fills there through this section.

The final one we’re going to look at next is just some single notes in there too. Let’s go and have a look at that.

Now we’re filling in the gaps with some single note ideas. Once again, all around D minor, D minor pentatonic. A little bit of D blues at the very end there too. Nice little funky muted popping part there as well to get these single notes between 5s and 7s on the 4th and the 3rd, the D and the G strings there.

Quite a nice sound there as well, filling in the gaps and then that little slide in the blues scale, 9 to 8 on the 2nd and again on the 6th fret there on the 2nd string as well. That’s a really, really fun way to approach adding in some different things.

I hope throughout the course of these lessons you’ve realized that you can build up funk guitar parts fairly easily. Start off with a nice chord like a Nile chord we started off, adding in some 16th note rhythms, adding in some bigger chord sequences, adding in single notes, adding in double stops, adding in triads, using different voicings across the neck.

The main things to bear in mind when you’re playing funk, keep it tight, keep it groove-based, and keep everything sitting perfectly with the track before you go adding in some crazy fills, some funk mongers fills, you don’t need too many of those. Every now and then you can add that in, but that’s like the icing on the top of the cake.

I really hope you got something from this. I’m always around if you want to talk to me or have a Skype lesson with me, or anything like that, just let me know. Comment it below, and I will see you next time where we’re starting a different series of videos. I’m excited to bring you those. Take care. See you soon.

Hi everyone, I really hope you got something from this funk guitar series introduction. If you can go and have a look at Joseph’s books on Amazon, and have a look at his website Fundamental Changes. Also come over and have a look at my channel SDPguitar for way more free videos to inspire you in your playing. Take care. See you next time.