One of the defining features of funk music is that the harmony of a tune is often quite static. There may only be one or two chords in a whole song.

The story goes that when James Brown interviewed the guitarist Jimmy Nolan, Jimmy was asked, ‘Can you play an E9 chord?’. ‘Of course!’. replied Jimmy. James Brown then grinned and asked, ‘Yes, but can you play it all night?!’

Well, obviously Jimmy could, and he went on to become one of the most iconic figures in funk guitar.

Whether the story is true or not, it goes to show that playing funk rhythm guitar is much more about playing ‘in the pocket’ than playing elaborate chord sequences.

This section examines many ways to approach jamming on static chords and discusses some essential voicings and progressions that you should know. The focus is on developing subtlety and nuance in your rhythm work.

You will improve your repertoire of chord voicings and progressions by studying a more harmonically advanced approach to playing rhythm guitar. Although this approach is a little more reminiscent of disco and soul rather than pure funk, you will find it invaluable when you want to apply the funk rhythm style to more modern types of music.

We will begin with the ‘staple’ funk E9 chord. Although it has frequently been used in this book already, it is a great place to start when looking at some of the nuances common to funk guitar rhythm playing.

The E9 chord is normally played in one of the two following ways: 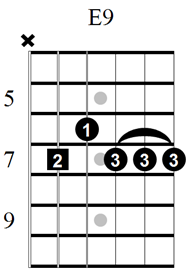 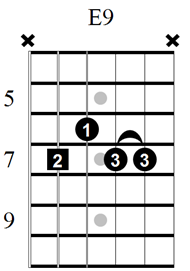 The 7th fret on the high E string is optional so try the chord with or without that note to get different effects.

As this chord does not contain any open strings, it can be moved to any position on the guitar neck. For example, when played at the 5th fret, it becomes a D9 chord.

When you’re practicing the ideas in this section, you should be aiming to attack the guitar very hard with your strumming hand. Most students I’ve seen normally don’t strum or pick the guitar hard enough.

You’ve probably noticed that the rhythm guitar sound on recorded funk tracks is very ‘poppy’ and cuts right through the mix. This sound can only be achieved by picking or strumming the guitar quite aggressively so you need to practice this technique. You can always soften off later if you feel that you’ve gone a bit too far, but if you don’t actually practice a hard attack, you’ll never have the option. Try to feel the strings resisting the pick when you are picking or strumming the guitar.

The first important rhythm guitar technique to learn is to slide a whole chord up the neck by a semitone. The idea is to start one semitone below the intended pitch, strike the chord and slide the chord up to the target in one smooth movement.

For example, to target an E9 chord, I would strum an Eb9 and quickly slide the chord up by one semitone to the E9.

Rhythmically, there are three ways to approach this slide.

Let’s look at each of these in turn.

A. From the on-beat to the off-beat

In the first example, the Eb9 ‘approach’ chord is played on the beat. It lasts for one 1/16th note and I have arrived at the target E9 chord on the second 1/16th note of the bar.

Pay careful attention to the strumming directions. Strum once on the Eb9, slide up a semitone and only strum again on beat two. Remember to strum harder than you think you need to!

Here are a couple of examples that show this technique in context.

The feel and nuance of funk guitar are almost impossible to notate perfectly so play along with the audio example to make sure you’re getting it right.

Notice how example 8c uses an open sixth string on beat one. Remember to keep your strumming hand moving up and down in constant 1/16th notes to help you stay in time.

One tip is to play the scratched notes on the top (higher pitched) strings and to play the full chords from the fifth string. By doing this, you can create a very interesting dynamic in your rhythm playing. You don’t need to hit all the strings every time.

The next example is a little more involved. It is a full two-bar pattern rather than a repeated single bar.

Once again, listen carefully to the audio and jam along as soon as you can. Don’t worry too much about playing every note perfectly, focus only on getting the Eb9 approach chord on the beat and sliding immediately up to the E9.

B. From the off-beat to the on-beat

The next approach is to play the Eb9 chord on the final 1/16th note of the beat and slide it up so that the target chord is hit directly on the following down-beat. This approach creates a very different rhythmic effect.

As the Eb9 chord is now on the fourth 1/16th note, it will be played with an upstroke.

The following example demonstrates this technique used in a musical context. Notice the extra strum in bar two.

The next example shows how the off-beat / on-beat approach can be used from the second to the third 1/16th note of each beat.

This final approach is similar to the previous example where we move from the off-beat to the on-beat, however, the slide is much more subtle and less pronounced. The idea is to hit the target chord on the beat and give it a little lead in from below.

Compare the sound of the following example with example 8e.

Using a grace note or ‘appoggiatura’ slide can give a slurred effect to the groove.

The following two examples show some musical applications of the grace note slide.

This lesson is an extract from my book Funk Guitar Mastery 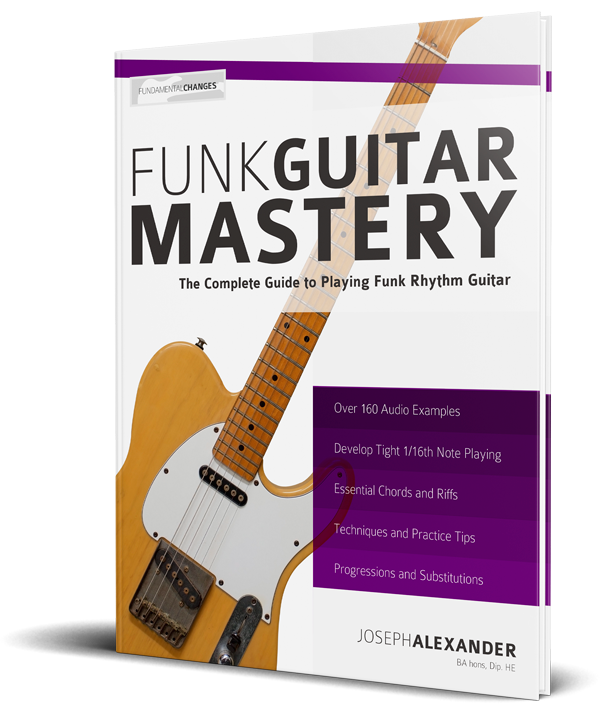