Moving on from last week’s introduction to funky pop playing, we are going to look at fingerpicking patterns for guitar. This is another essential but overlooked skill for guitarists to master. Whether it’s folk, pop songwriter or a big rock ballad, having this style of playing dialed will get you through the gig.

The key to all rhythm playing is consistency both in terms of pace and dynamics, but in terms of executing the part cleanly every time. If you provide a rock solid accompaniment for a singer then they will have the confidence to deliver their best performance too, and if you’re accompanying yourself, then a strong rhythm style will give you a much more polished and professional feel. A simple pattern played evenly is always much better than shooting for a complex idea that ends up disrupting the musical flow and groove.

As a general rule, keep the thumb covering the bottom three strings, and assign the index middle and ring to the top three strings. In the notation you will see PIMA written under each note. These letters refer to the four digits respectively and illustrate the suggested picking pattern.

Finally, I have limited our harmonic vocabulary to common open and barre chords to allow us to concentrate on the picking, but feel free to experiment will high voicings, open strings and moving bass notes to create interesting and creative fingerpicking patterns for guitar.

Firstly we have a folky 6/8 example. Follow the picking directions and use a pinching motion to execute the simultaneous notes. To get the most out of these simple ideas think about letting the top note ring out for it’s full value, particularly in bars one and two of this example – the open E, G and F# should be a melody within the accompaniment and aim to make the changes of chord are as smooth as possible. 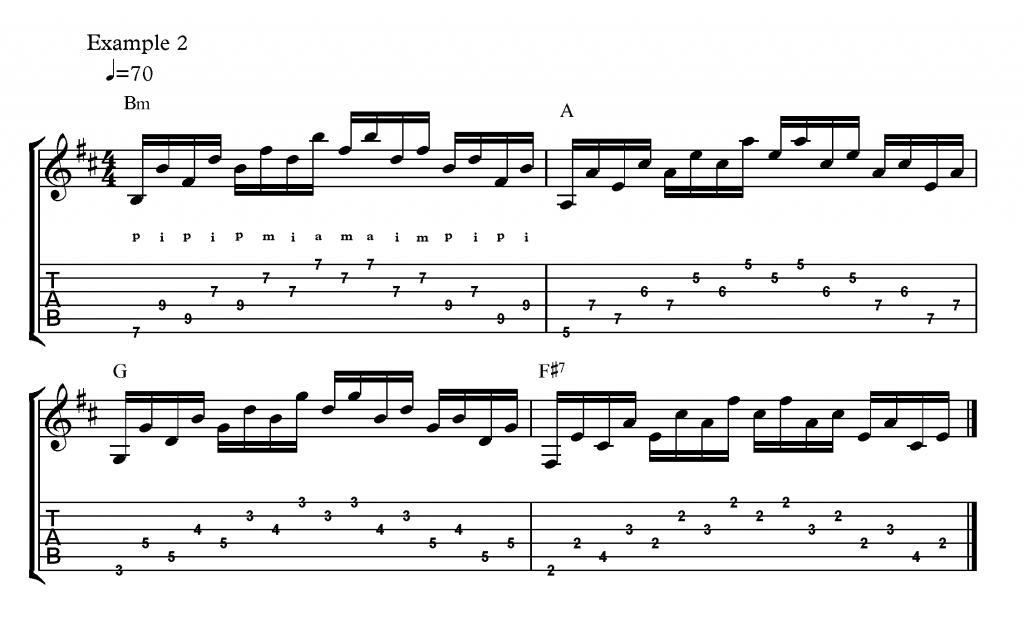 This example borrows from an etude by Brazilian composer guitar Villa-Lobos, but could be well employed in a number of other contexts. Follow the picking directions carefully for the most efficient approach.

Finally a variation where we pluck double stops across the strings. Try to keep the fingers locked together like a claw and pluck together when using I and M or M and A. By holding down the whole chord throughout, it gives this example a slightly pianistic effect.

Great examples of fingerpicking patterns for guitar are everywhere. Joni Mitchell, James Taylor, Katie Melua, and even Metallica have some great examples in their back catalogue. Merle Travis had such a unique approach at the time he had a whole technique named after him (Travis picking) which separates out the melody, harmony and bass lines. Folk guitarist Richard Thompson is a modern master of this style.

Extended Arpeggios on a Jazz II V I Solo