Developing robust single string picking technique is a crucial part of mastering speed picking. Not only is it a stylistic element of shred guitar, but a focus upon single string work presents an opportunity for you to excel at several critical technical facets before string changing becomes a factor.

These examples are designed to give you the control, synchronization, speed and timing that will put you in good stead for future shred licks. I’ve created each drill with the aim of building your skill set progressively. When you can execute each one cleanly, accurately and with a degree of confidence, move on to the next.

After at least a few repeats, move each exercise to the other strings of the guitar one by one, paying adequate attention to any strings that feel harder to play than others. Focus on the weak points until each string feels similar in comfort.

Beginning with Example 3a, use the high E string as a rest stroke guide rail for your picking motion along the B string. That means picking at angles whereby down strokes push down towards the guitar, and upstrokes pull away. This is downward picking orientation, which is broken down in detail in Neoclassical Speed Strategies for Guitar.

As you move the drill to each string, do the same with the higher adjacent string. On the high E string there obviously won’t be a higher string to rest into, so be sure that your angles are consistent with what you did on the other strings. Focus only on your picking hand at this stage, as you incorporate pick edge offset, downward picking orientation, and anchored forearm rotation.

After you’ve completed the first drill at various speeds and on all strings, add variety in pitch and extra fingers.

Examples 3c and 3d are designed to familiarise you with the natural minor scale along one string starting by moving a simple motif up and down diatonically. The crotchets on beats 2 and 4 allow you to shift positions with plenty of time. Stay with guide rail concept at this point.

To ease into playing a steady flow of semiquavers along one string with position shifts, the chromatic crawling pattern of Example 3e, which I call The Centipede,will build your picking hand endurance. The index finger leads each ascending group of four notes, and the fourth finger leads the descent. Aim for at least four clean repeats on each string before attempting a higher tempo, and keep track of the tempo where it may fall apart so that you can monitor your progress.

The Bumblebee-style endurance drill of Example 3f involves all six strings, wider position shifts between chromatic groups, and the fourth finger leading consistently. It is crucial that DPO is used to facilitate each descending string change. Make sure that your exit upstroke on the higher string sets up the entry downstroke of the next string without the need for any second movement. 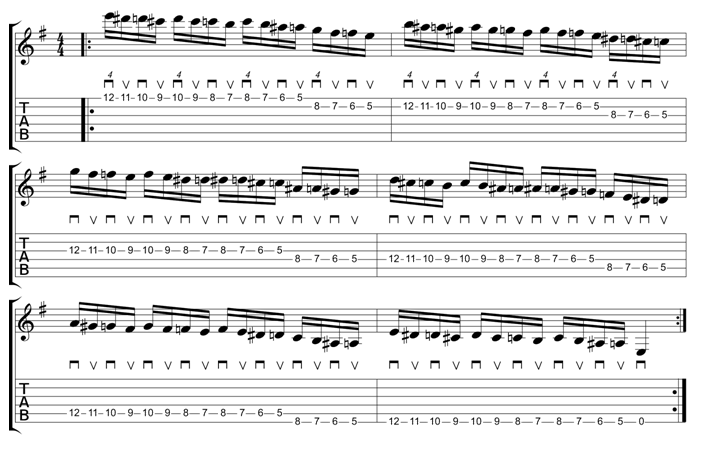 Ascending and descending fours are staples of an excellent diatonic sequence repertoire, and in the next two examples, three notes from each position are extended with a shift to an additional note in the next position. Ensure that each shift synchronises with the pick stroke to avoid the fourth note of each group sounding twice. A good way to lock in your timing is to accent the downstroke that begins each unit of the sequence.

To master all the essential mechanics and picking strategies of shred guitar, check out my book Neoclassical Speed Strategies for Guitar. 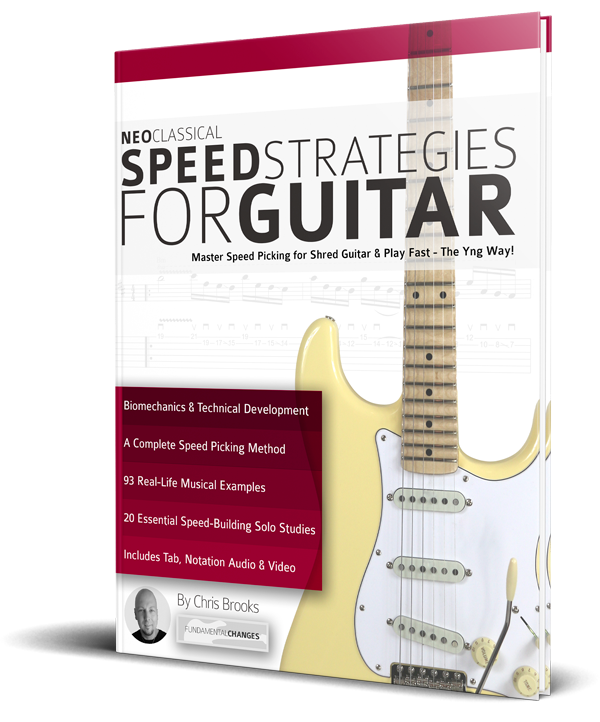 Play Fernando Sor Study 2 in A Minor for Guitar
Hi, we use cookies to make this website better. For the best experience, please accept cookies. We will never sell your data to third parties.I AcceptNo CookiesPrivacy policy
Revoke cookies
Scroll to top