The following rhythmic and melodic exercise is one of my favourites to give to students who struggle with developing a melodic line throughout a whole solo. This exercise requires quite a lot of concentration in your practice time, but you will quickly notice an improvement in your ability to naturally build a strong melodic thread throughout your improvisation. The exercise sounds simple on paper but in actual fact it takes a lot of discipline and patience to master. 1) Take a short, fixed rhythm and use it to improvise a melodic line 2) Repeat the rhythm once per bar for three bars, varying the melody each time 3) In the fourth bar, play the rhythm again however this time freely develop the rhythm 4) Use the rhythm you created at the end of bar four as the set rhythm for the next four bars 5) Repeat The secret to making this exercise work is to keep the rhythms short and uncomplicated at first. I think this kind of exercise is much easier to see musically than it is to explain in words. Take a look at this example: 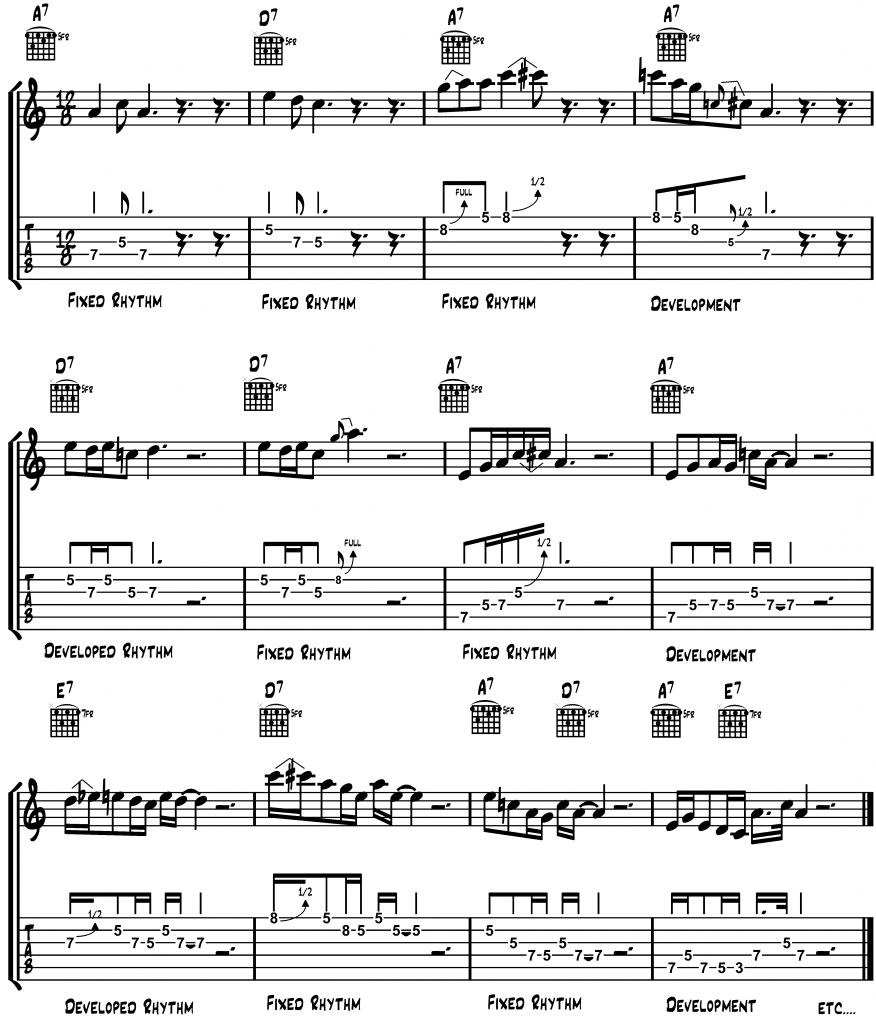 I begin with a very simple phrase; just a couple of notes and then repeat that exact same rhythm for the first three bars. In bar four I trust my ear and allow myself to develop the idea very slightly. A small variation is much better than a full bar of improvisation here. The tricky bit is to remember the last couple of notes you played in bar four. Take the rhythm of the notes in bar 4 and base a short phrase around that rhythm in bar five. Once you have your new, developed rhythm stick with it and repeat the process. Compare bar 12 to bar 1. These lines are very different but we have arrived at the complexity in bar 12 through a natural, organic process. For a really masterful demonstration of this kind of rhythmic development, one of the best pieces of music you can listen to is the first movement of Beethoven’s Fifth Symphony in C Minor. While not strictly the blues, you can easily hear how he develops a four note phrase into one of the most important pieces of music ever written. Listen to how the phrase develops rhythmically throughout the piece and changes with subtle and not-so-subtle use of orchestration and dynamics. It’s the perfect lesson in creating something massive out of the smallest of rhythmic fragments. While it isn’t as explicit as Beethoven’s Fifth, a bluesier example of all the techniques in this chapter, including the rhythmic development ideas in this section is Lucille by B.B King There’s an extremely strong question and answer theme running throughout the song, especially in the longer solos, but if you listen attentively you can clearly hear how he rhythmically develops his melody from one phrase to the next. Many people will turn around to me at this point and say, “yes, but he just feels it, he probably never even thought about it like this”. I’m sure those people are right, however if we are to learn to develop as musicians, we often need to break down the ‘unconscious’ skills of talented musicians into tangible, learnable chunks and work on them as exercises before they eventually become ‘I’m just feeling it’ to us too. Imagine you were going to learn a magic trick from an illusionist. They would be an inadequate teacher if they just said “it’s magic!” The written example revolves around your awareness as a player, not just rhythmic development. You have to be in control of what you’re playing for it to work and you need to consciously remember the previous rhythm you played. It’s a fantastic exercise to move away from just ‘noodling’ on the guitar and working towards actually being in control of what you play.