Feeling tired of the same old open chords? Bored of the sound of barre chords? In this lesson you will learn secrets to unlock a new tonal potential in your rhythm playing, and your band mates will be forever thankful for your newfound knowledge!

The rhythm guitarist in a pop outfit has many important roles to play. Firstly and most obviously, providing harmony for the vocalist or other melodic instruments. Secondly and just as obviously, providing rhythm that fits the music. As a budding guitar player you will inevitably learn the two principal types of guitar chords – open and barre chords. In many situations these may suffice, but for those of you who want to get more out of their guitars, we can modify them to fit the situation – bringing a much richer sound to the mix. One way we can do this is by creating what is known as slash chords.

In the video – we are looking at a i – VI – III – VII progression (Em – C – G – D). In pop/country and soul music this progression is one of the most common. This is because of its cyclic feel, simplicity and its melodic potential. The wonderful thing about the progression in this key is that the chords are all open chords and in first position, meaning that the chords contain at least one open string. The thing about open chords is that some of them (e.g. C/A/Am/D) only use 4 or 5 strings; what if we could utilize the unused strings to enhance them? Those are some of the things you will see shortly. First – here are the base chords we will use in the first part of the tutorial.

Notice that the root note (bass note) of each chord is the same as the name of the chord itself. This means that the chord is in root position.

Adding the 5th to the bass of open chords

The first trick that we will see in this lesson is that we can change this root note to bring out a much deeper sound in the chord. In example 2 (and as explained in the video), the 5th is being added in the lower register of the C chord which makes a C/G chord. The C chord contains the notes C, E and G – so by adding an extra G you are essentially doubling one of the notes; which is why it sounds so great!

The Em and G chords are left as normal, since they already occupy all 6 strings.

We are also applying the same to the D chord. The 5th interval in a D chord is A, luckily for us this A is an open string – so when strumming your D chord make sure to let the A ring through at the same time! Now we have changed the previous 4 note voicing into a 5 note chord; the thickness in sound of this new chord is obvious, but there’s more – it connects far easier to the E minor chord as well.

Aside from the ones shown in this tutorial, try doing the same with your classic open A major or minor chords! Or with the open D minor chord! They all work the same and sound wonderful. Try now with your favourite strum-along songs and see how much fatter your playing sounds.

So you have seen how open chords can be ‘fattened up’ and thickened to create a different sound. Next we will look at barre chords and apply some more tricks. Here are the basic shapes used in this exercise.

Here are the basic barre chords in root position.

One thing that you can do with chords is eliminate unnecessary notes to create a smaller shape. In the video you can hear the difference when taking out the repeated octave – a much twangier/percussive sound results. This type of technique occurs a lot in bands where there is more arrangement necessary, like a funk band. In terms of technique, if using a plectrum make sure that you mute the note that you do not need. You may prefer using hybrid picking or fingerpicking, depending on your desired sound. Here is how these shapes will look like under your fingers. 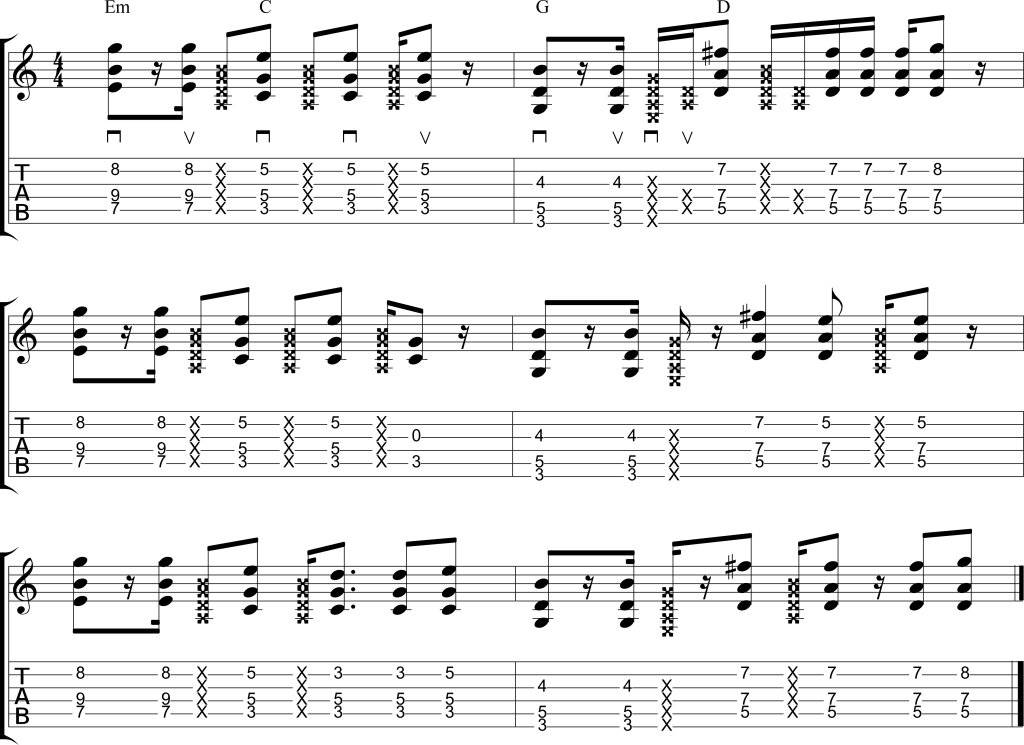 In this example, you can see that one note has been removed. All chords are in root position

Substituting the third for the bass note

Next we will take this one step further. We can substitute the 3rd as the bass note of the chord; as a result the sound is much more open, especially when the bass player in your band is already playing the tonic. So doing this with G chord will create the following shape, notice the B in the root. Doing this makes the guitar also sound quite piano-like, as pianists commonly play inversions of chords. The chord can be named G/B.

Example 5 – Modified G with third in the bass

The G chord has been modified to create this new wonderful shape in bar 2. In fact, this chord shape can be moved anywhere on the neck making it invaluable to your playing! All other chords remain the same at this stage.

The same happens with the D chord where we apply the F# in the bass. See the below example in which both the G and D chords have been altered to include this technique. Try switching between root position and this D/F# chord and see the difference it makes! 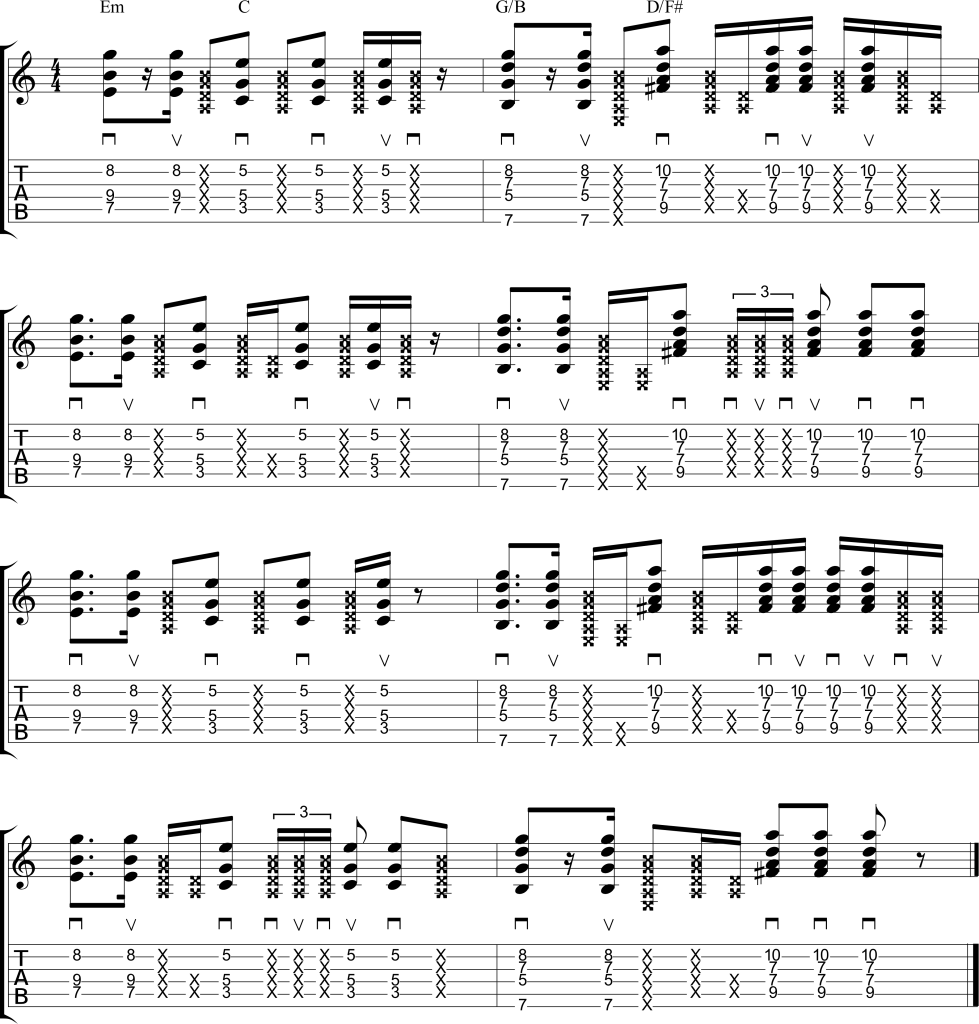 In this final example, see how both ideas have been combined. The repeated octave is removed and the chord is played with the 3rd in the bass.

So you can see that the slightest modification can create a whole new sound. It is important that you continue to experiment with your own chord voicings to see what you like best as there really are infinite possibilities. Try mixing all of these ideas together and you will see how versatile the guitar can be, and don’t forget to share this lesson and post your comments below!

Find out more about Tim Scott on his website www.timscott.co.uk