One of the most exciting aspects of high level country guitar players is their effortless ability to move around the neck while outlining country chord changes.

The quickest way to start breaking down this barrier is to start to place a focus on chords, and start seeing your scales and licks as being developments on these basic ideas.

In this first example, I’ve outlined an C major triad at the 1/8th fret and then demonstrated that the notes of this triad can be connected with other notes to turn this small chord into a lick. When doing this, I’m playing licks, but seeing chords.

With this chord position down, the licks you play can become quite complicated, but I’m still never losing sight of the little chord from which the idea is built.

There are a lot of note there, but in my mind, they’re either notes of the chord, or they’re interesting and melodic ways of getting from one chord tone to another.

It’s possible to analyse the above lick and say that it’s using notes of the C Mixolydian scale (C, D, E, F, G, A, Bb) with an added b3 (Eb). While this is certainly the case, I’m still thinking of it as chord tones, and embellishments.

As you develop your skills on the neck, you’ll quickly find that all you need is a few chord positions, and melodic notes around it, and you can play some really great sounding stuff.

Here’s another example of a C chord (in the G shape of CAGED), and then a corresponding melody.

As with the previous example, the notes being added around the chord come from the mixolydian scale and also include an Eb.

For the rest of this lesson I’ve taken example 5e from my latest book, Country Guitar Soloing Techniques, and have used it as a way of breaking down how to play over changes.

The chord progression presented is A major, D major, E major, and A major.

While all three of these chords are indeed in the key of A, just using the A major scale over each will result in solos that really don’t connect very deeply with the chords.

I’m actually treating each chord as a dominant 7 chord, so A7, D7, E7, and A7. This means that each chord is in it’s own key and has it’s own set of strong and weak notes.

In order to effectively play over these changes, I see basic triads on the neck, with my scale options built around that.

As an example – here’s an open A chord with scale notes around it. The chord that can be played is shown with black dots, while scale notes are hollow. 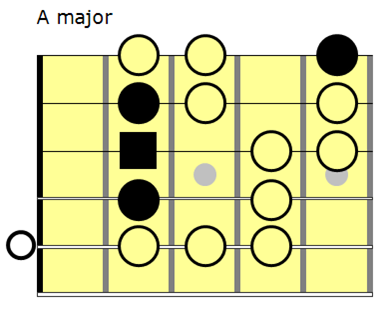 As I transition up the neck, my perspective changes to see a new chord form, and a new selection of notes around it. 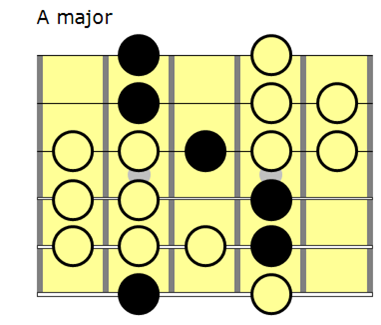 When the chord changes to a D, I can see a new chord form still at the 5th fret, along with a new pool of notes to draw melody from. 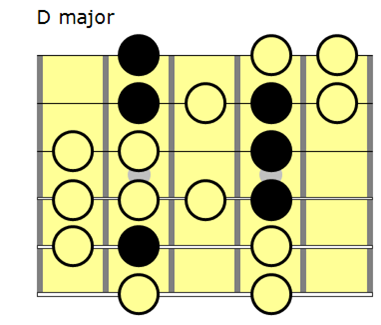 Here’s the lick presented in full with the chords above. When learning the phrase, pay attention to the underlying chord you’re on, and refer to the video for a visual demonstration of how I’m doing this. 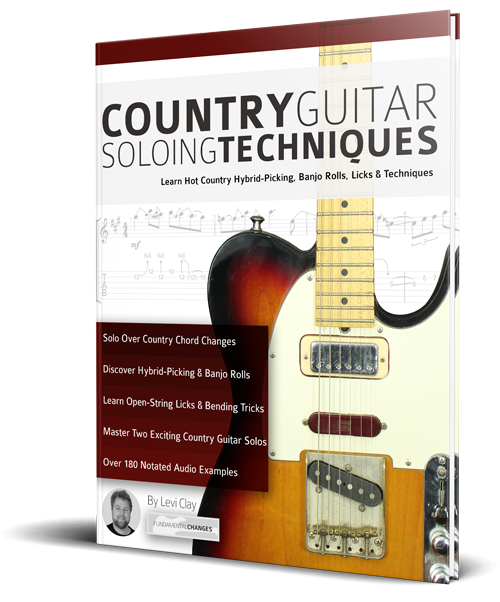