Combining Arpeggios with the Bebop Scale

We’ve done a lot of work with arpeggios and the bebop scale. It’s now time to combine the two devices for a musical, articulate sound. To do this we’re going to start by ascending arpeggios from each chord tone and then de-scending the bebop scale. This is a common sound and you can use it to write your own lines and licks.

Once again we start our structured approach by ascending the E minor 7 arpeggio from the root to b7. We then descend 4 notes down the bebop scale to land on ‘G’ the b7 of A7. We ascend the Bb diminished arpeggio to the octave of the b7 (G) and we then descend the bebop scale to land on the major 7th of the D Major Chord (C#), finally jumping down to the A for a real bebop flavor. This is shown in figure and audio example 9a.

Figure and audio example 9c is another example from the 3rd of E minor that hits the 3rd of A7 and a chromatic approach note pattern into the 3rd of the D Major:

I’ve given you one or two examples for each arpeggio tone but I expect you’re anxious to create your own lines and make your own play-ing unique and fluid.

How can you be creative with this important concept?

It is an important stage to learn and play the lines above with confidence as they’re a great place to start. There is a reason I have written out the theory behind the construction of the lines; it’s so you understand what’s happening technically to help develop your own voice.

Have patience and determination to learn and understand these lines before embarking on your own voyage of discovery.

When I was writing these ideas I sat with my guitar and said to myself; ‘ok what happens when I ascend 4 notes up an arpeggio and descend a bebop scale?’ Then I spent some time figuring out some lines. I didn’t stick to this rule too hard as you’ll see if you really study the lines above. This was however my starting point and everything developed naturally from there.

When you’re writing your own lines how about these ideas to get you going?

Ascend 3 notes up an arpeggio and descend the bebop scale. Ascend 4, ascend 5 etc. 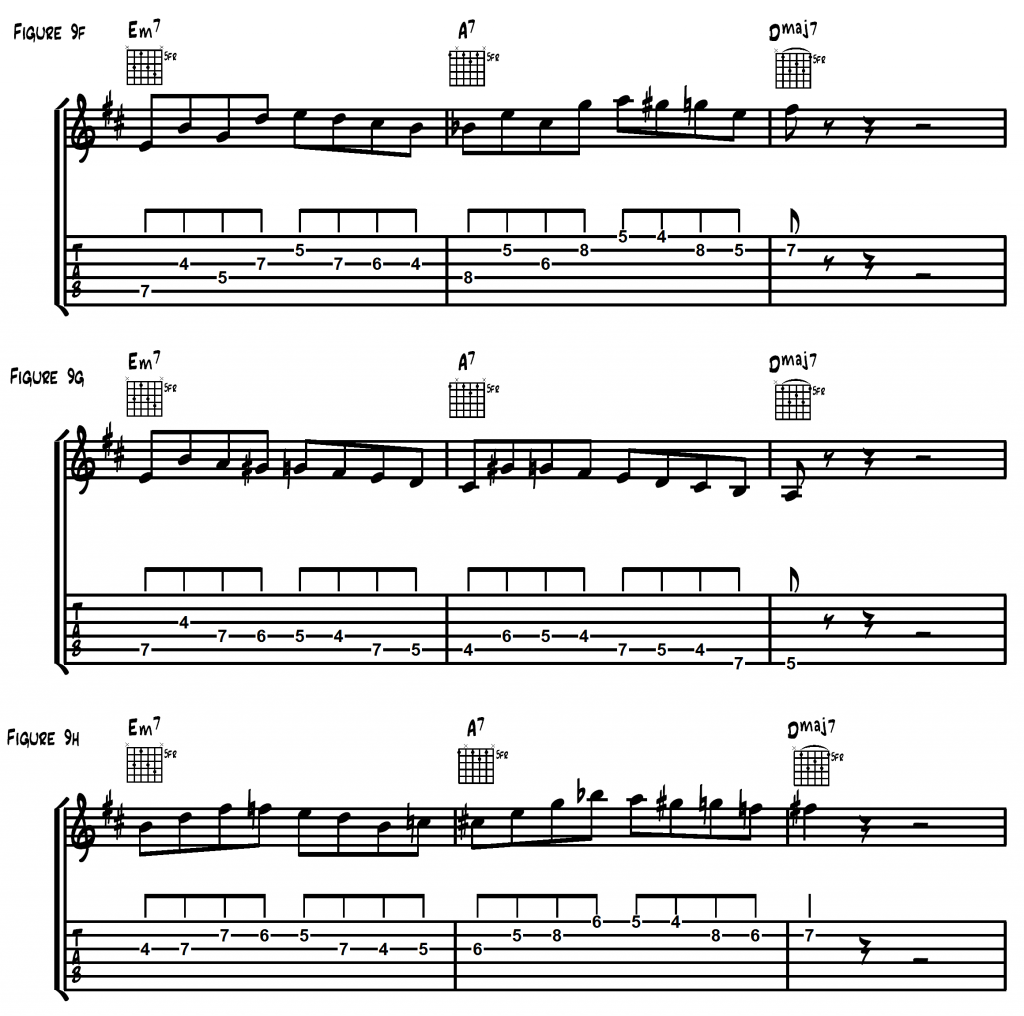 There are so many possible combinations so for now just pick one idea at a time. If you like it write it down, there’s blank music paper at the back of this book to get you started and lots of free resources online for printing your own paper.

Remember, there is no way to cram in every idea in every lick. Keep it simple for now and try to think of this lesson as a chance to internalize the sound of the bebop scale in conjunc-tion with arpeggios.