The Chicago Blues Turnaround is a trademark feature of the Blues. They are a musical line that helps the song return to the start of the chord sequence. A turnaround normally starts on the I chord and ends on the V chord and creates tension that requires resolution at the beginning of the next chorus.

We also need to begin and end songs in an effective, interesting way and intros and endings can easily be created from turnarounds. After working through this lessons  you will be able to play complete songs that include intros, Chicago blues turnarounds.

Let’s start with an example that fits over all the walking bass lines and riffs that you learned earlier. Here is an idea played in 1/4 notes.

If the tempo is slower, you can play more by repeating each 1/4 note as an 1/8th note or adding more embellishments.

Here is a movable variation of the previous idea.

Someone once said, ‘Muddy Waters invented electricity’. Well, maybe not quite, but when it comes to Chicago Blues innovation, this is most certainly true.

Muddy started out playing acoustic Delta blues. The Plantation Recordings from the early ‘40s document that time. When Muddy went to Chicago in the late ‘40s, he didn’t change his playing style – he just electrified it. He started recording with reduced accompaniment, often with just his voice, guitar and an upright bass. Classic recordings from this era include Can’t Be Satisfied, I Feel Like Going Home, Train Fare Home and Kind Hearted Woman. In the early ‘50s he added drums, bass, blues harp, piano and a second guitar – the rest is history.

The Muddy Waters Band became the blueprint for the Chicago Blues sound.

The following two Chicago blues turnarounds are in the style of Muddy Waters. Transpose both turnarounds to the key of A by playing them one string higher. Find a movable version of them so you can play them in other keys.

This turnaround is also a clear example of “it’s not what you play, but how you play it”. Leave out all the hammer-ons and bends, then listen to how lifeless the line sounds without them.

Here is another classic Chicago Blues Turnaround from Muddy:

The above idea can be adapted to any similar bass riff: Play the riff as usual on the I chord in bar eleven, then walk up to the V in bar twelve to create the turnaround.

Here is a typical Chicago blues turnaround for a Blues Rumba. In bar eleven the riff on the I chord is followed by strums of the E7 chord in the following bar. The last 1/8th note can be left out making it easier to get back to the main riff after the turnaround.

Here is a turnaround that features an augmented V chord and is frequently used in slow blues. Note that the chord changes every two beats from I to IV and back to I – a typical feature of the slow blues.

Let the notes of each arpeggio ring. At the end of bar two, the lead guitarist or the singer usually plays a pickup to lead back into the next chorus. In bar one you could strum the chords in triplets to create a different rhythm.

Turnarounds often consist of two independent lines or voices, one of them higher and one of them lower. These can be played by different musicians or both on one guitar. Often, one of these lines is doubled. For example, the bass player could double the lower guitar one octave below. 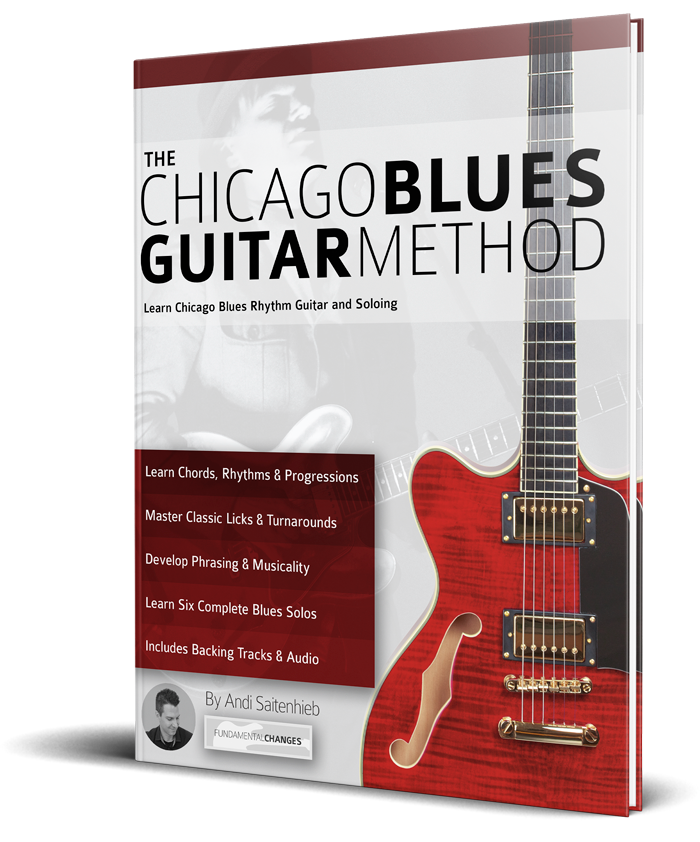 Open A Tuning For Blues & Rock Guitar (5)
Scroll to top