The lesson is an excerpt from my new book: Heavy Metal Lead Guitar

This solo is in the guitar-friendly key of E minor and is played over a classic heavy metal backing riff in the vein of bands like Black Sabbath. We’re using a blues based soloing style but with the more aggressive tone and vibrato of the heavy metal pioneers.
A feature of this style that distinguishes it from the blues is the ‘quantising’ of the phrasing. In contrast to the way blues players frequently play behind the beat to get a lazy feel, this solo should be played very in time and on top of the beat to match the forward motion in the rhythm section.
The guitar tone of this period was all about fuzz pedals and valve amp overdrive, rather than the more modern distortion we’ve been using in a lot of the examples. Typical amps were made by Marshall and Orange.
Figure 1 shows the rhythm guitar part for the first solo study. There are two distinct sections to this example. The A section has a spacious riff, which opens up the possibility of question and answer phrases in the gaps before moving on to the B section. We use two-string power chords throughout, but tonal contrast comes from allowing the power chords to ring out fully in the A section before palm muting in the B section to keep them in the background of the
texture.

Listen to the full solo here: 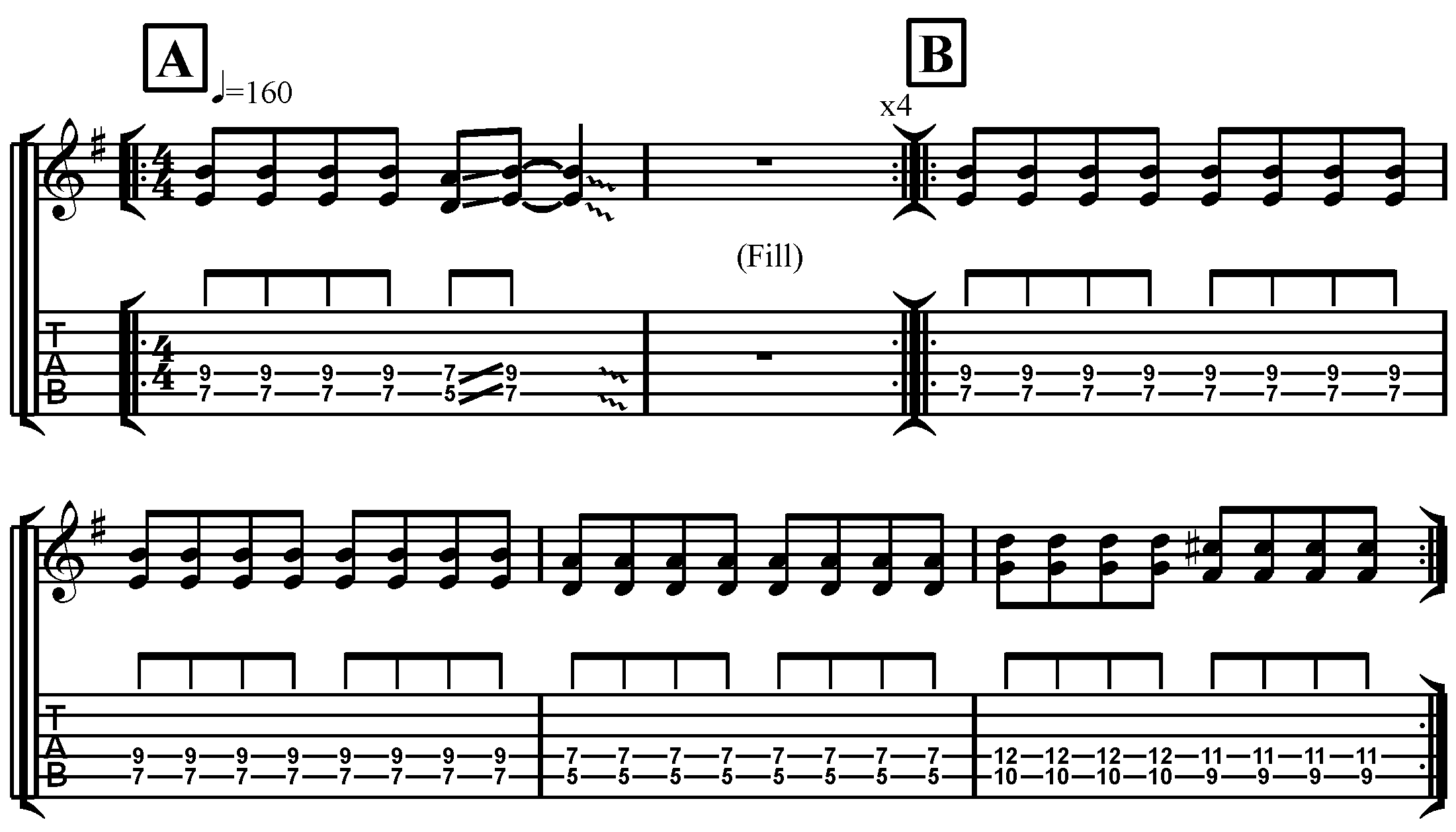 The solo sticks to the minor pentatonic scale throughout, moving freely between several different positions as we build up from melodic 1/8th note phrases to busier licks.

I’ve included the accompaniment riff in the solo transcription to show clearly how the question and answer phrases function. You are welcome to try to play both parts at the same time, but be careful with the swift position shifts to make smooth transitions. To start with, focus on playing just the lead fills before trying to combine both parts.
Bands with only one guitar player commonly employ compositional ideas like this to give the impression of a bigger ensemble. Not being supported by a rhythm guitarist when soloing in a live context can leave the overall texture sounding quite thin.

Now we’re into the main solo, and I’ve started with a straightforward melodic pentatonic phrase. Although these licks seem simple, it’s important to make sure your string bends are confident and in tune. The vocabulary of early heavy metal was rooted in the blues-rock of Cream, Hendrix and the Yardbirds. Be sure to keep driving forward by not allowing the phrasing to swing or fall behind the beat.

The next four bar chunk re-states the repeated string bends from bar 9 before taking things up a gear with a faster triplet phrase into a slippery descending pentatonic scale. Use fingers one and three to play the whole phrase, as this is the strongest combination to handle the legato in bar 10. Doublestop pentatonic licks like in bar 16 help to thicken up lead guitar parts in absence of guitar or keyboard accompaniment.

The solo is rounded off by a sustained passage of triplets across bars 18 and 19. You can choose whether to alternate pick all of these notes or use pull offs. Alternate picking will give you the most aggressive tone but can become two dimensional if overused. Finally the solo signs off with a common melodic bend to land on the tonic, E.

Once you’re confident try playing to the backing track, then have a go at writing your own solo over it as well:

How to Develop Strong Vibrato in All Fingers
Scroll to top