Angus McKinnon Young was born in 1955 in Glasgow, Scotland and migrated to Sydney, Australia in 1963 with most of his family (including his older brothers Malcolm and George). He began playing by using a re-strung banjo and then later a second-hand acoustic guitar. After dropping out of high school at the age of 15, he began his musical career by forming his own bands. After limited success with these groups, Young formed the rock group AC/DC with his brother Malcolm on rhythm guitar. The name AC/DC was apparently taken from a label on the back of his sister’s sewing machine.

Angus Young’s guitar playing has always been the central musical attraction in AC/DC, and outside of his energetic live performances, hard rock fans universally acclaim his raw blues-rock guitar approach. Favouring Blues and Pentatonic sales primarily, he makes frequent use of single and unison string bends and a fast, wide-pitched vibrato along with many double-stops.

Young is best known for his long-term use of Gibson SG guitars and Marshall amplifiers, most commonly played through 4×12 cabinets with Celestion speakers. His sound isn’t especially overdriven in comparison with other hard rock guitarists and he maintains considerable clarity while sounding aggressive and exciting. His tone is rarely augmented with any obvious effects, although he does use a wireless system on stage that allows him to move around without the hindrance of a guitar cable.

You can use this exclusive AC/DC-style backing track to help you practice the following Angus Young guitar licks.

Phrased slightly behind the beat, this line uses the E Minor Pentatonic scale and a series of bends to create an aggressive, blues-based statement.

Look out for the pinched harmonic (P.H.) in bar one on the second bend – try to get a little flesh of the thumb to hit the string at the same time as the pick to create this effect. The bend and hold in bar two may take a little practice as well. Bend up from the 15th fret on the second string with the third finger and reach out with your pinky to hit the 15th fret on the high E. Add as much vibrato as possible.

Example 2b demonstrates how Angus often uses short, fast flurries of notes interspersed with longer held notes (plus lots of vibrato) to create interesting phrasing and dynamics. Notice how the first phrase is delayed by a beat… it makes you wait and draws you in. There’s nothing too technically demanding here, but watch out for the subtle blues curl (1/4 tone bend) in bar two, which is essential for achieving an authentic Angus Young sound.

There’s no need to go all out on every lick; sometimes space and melodic note choice is exactly what the audience needs to hear. In this example, the C# (bar two, beat 1) is perhaps unusual but not unexpected in the descending scale (E Dorian) line. The pinched harmonics with wide vibrato (are you sensing a theme here?!) create a hard rock edge, as does the E Minor Pentatonic phrase in bar three.

Notice how the rhythms in bars two and three are unpredictable to keep you engaged.

Our new book 100, Classic Rock Licks for Guitar in a definitive guide to playing in the style of the 20 greatest rock guitar legends.

With extensive biographies, discographies and detailed technical breakdowns of each lick, it is a must-own title for all aspiring rock guitar soloists. 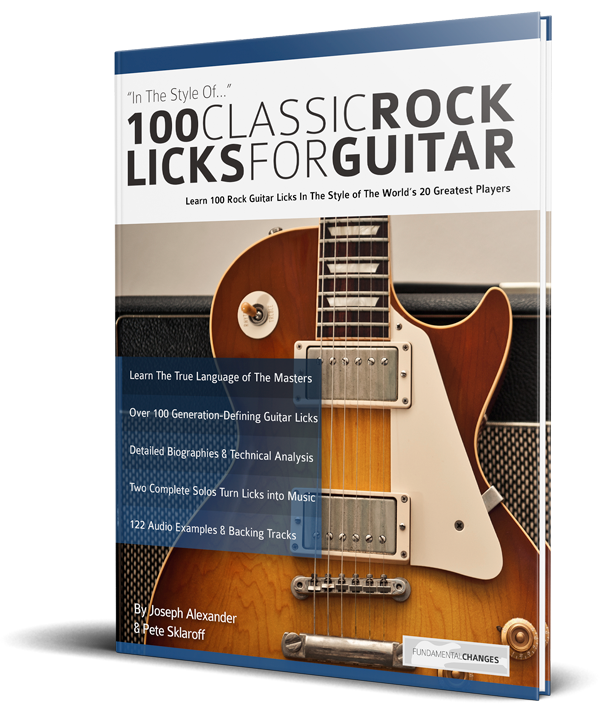 Blues Guitar Comping Playing On The Porch – How To Play Blues Guitar On Your...
Scroll to top