An Easy Guide To Open Tunings For Blues Guitar (1)

What are Open Tunings? And what are they good for? How can you integrate them into your own playing? In the following series of articles I answer these questions,and also show plenty of great sounding riffs and licks for the most important Open Tunings that you can incorporate into your own Blues guitar playing immediately.

All examples are taken from my new eBook ‘An Easy Guide To Open Tunings For Blues Guitar’, which contains many more examples and ideas (available at my website).

What Is An Open Tuning…

If a guitar is tuned to an ‘Open Tuning’ playing the open strings results in a major chord (or less common in a minor chord). There are many open tunings, but by far the most common ones are ‘Spanish’ and ‘Vestapol’. Both terms stand for a relative tuning of the strings to each other, no matter what the actual pitch is. It’s not as complicated as it may sound. Before long things will get absolutely clear!

The great advantage of open tunings is that you can play chords and melodies high up on the neck and all the open strings fit in with your root chord. The result is that for instance you can play a Steady Bass or an Alternating Bass on the open strings at the same time. You get a very full and resonating sound with very little effort. In an open tuning it’s relatively hard to hit a wrong note as long as you are on the root postion chord (that is the chord the guitar is tuned to).

Each tuning has typical licks and riffs that create a certain sound typical for this particular tuning. Blues guitarists with a trained ear can tell in which tuning a certain song is played – just by listening to it!

A Word Of Caution!

If you tune your guitar higher you need to be careful. Due to the higher string tension not only do your strings break more easily but also your guitar could be damaged severely. On an electric guitar with a solid body and 10s strings you can tune up to ‘Open E’ or ‘Open A’ without a problem. But if you want to use Spanish or Vestapol on an acoustic guitar with 13s strings I strongly recommend

How to get from Standard Tuning to Vestapol Tuning

‘Vestapol’ Tuning is a generic name for all open tunings that emerge from tuning the guitar as if you were fretting an E major chord: 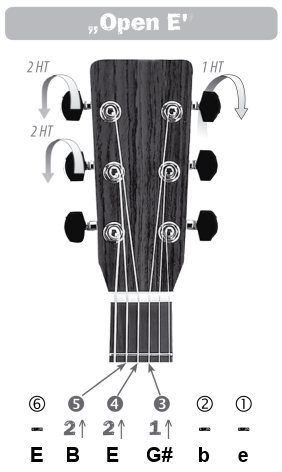 The A string and the D string are tuned two semitones higher and the g string is tuned one semitone higher. If you play the open strings while your guitar is in Open E tuning you’ll hear an E major chord, as if you were fretting the E major chord in standard tuning (E-B-E-G#-B-E).

But ‘Vestapol’ doesn’t have to be Open E tuning. Open D tuning is also very common. As I wrote before the term ‘Vestapol’ determines a relativ tuning of the strings to each other, no matter what the actual pitch is. In Open D the distance from on string to the next is exactly the same as in Open E, just the absolute pitch is different (D-A-D-F#-A-E ). If you tune to Open D and put a capo on the second fret you get Open E. All the chord shapes, licks and riffs are played exactly the same way in both tunings, they just sound a little higher in Open E and a little lower in Open D. 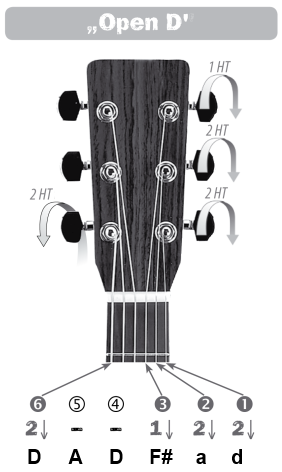 (Note: I will use the Open E tuning for all the Vestapol examples so everybody can play them and sound like my audio examples: If you are tuned to Open D you just need to put a capo on the second fret to play in Open E.)

Here are some chord shapes for the I, IV and V: 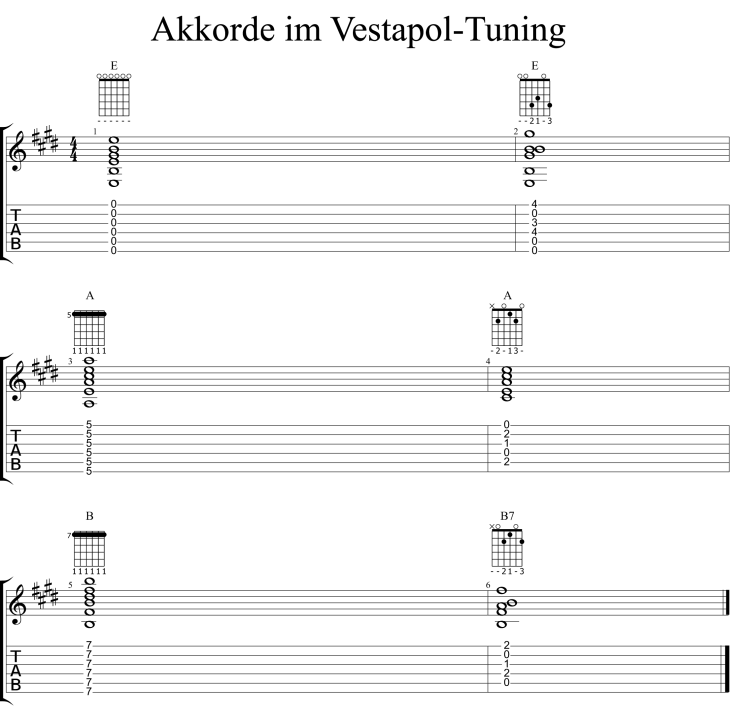 It’s a very good idea to familiarize yourself with a new tuning by playing riffs you already know from standard tuning.

Here is a typical variation of the Boogie riff:

Here is another great variation of the Boogie riff that features a triplet:

The note on the 4th fret could be played as a hammer on.

To play these riffs on the IV (or V) chord simply move them up 5 (or 7) frets like this. I use an index bar on the lower frets for these riffs:

Here is a simple turnaround:

In the next article you’ll learn some great sounding must-know-riffs that work especially well in Vestapol tuning. Later we will look at other tunings as well. Stay tuned!