In this third lesson about Open Tunings you will learn about ‘the other’ Open Tuning, called ‘Spanish Tuning’ (Open G or Open A). Again we start to get familiar with the new tuning by playing some basic chords and then some riffs we already know from standard tuning before we get more adventuorus in the next lessons. If you haven’t already done so please read the first two parts of this series, especially the paragraph ‘A Word Of Caution’.

The D string, the G string and the B string are tuned two semitones higher. If you play the open strings while your guitar is in Open A tuning you’ll hear an A major chord, as if you were fretting the A major chord in standard tuning (E-B-e-g#-b-e).

But ‘Spanish’ doesn’t have to be Open A tuning. Open G tuning is also very common. As I wrote before the term ‘Spanish’ determines a relativ tuning of the strings to each other, no matter what the actual pitch is. In Open G the distance from one string to the next is exactly the same as in Open A, just the absolut pitch is different (D-G-d-g-b-d ). If you tune to Open G and put a capo on the second fret you get Open A. All the chord shapes, licks and riffs are played exactly the same way in both tunings, they just sound a little higher in Open A and a little lower in Open G. We already heard about this relationship in the lesson about Vestapol Tuning.

(Note: I will use the Open A tuning for all the Spanish examples so everybody can play them and sound like my audio examples: If you are tuned to Open G you just need to put a capo on the second fret to play in Open A.)

Here are some chord shapes for the I, IV and V: 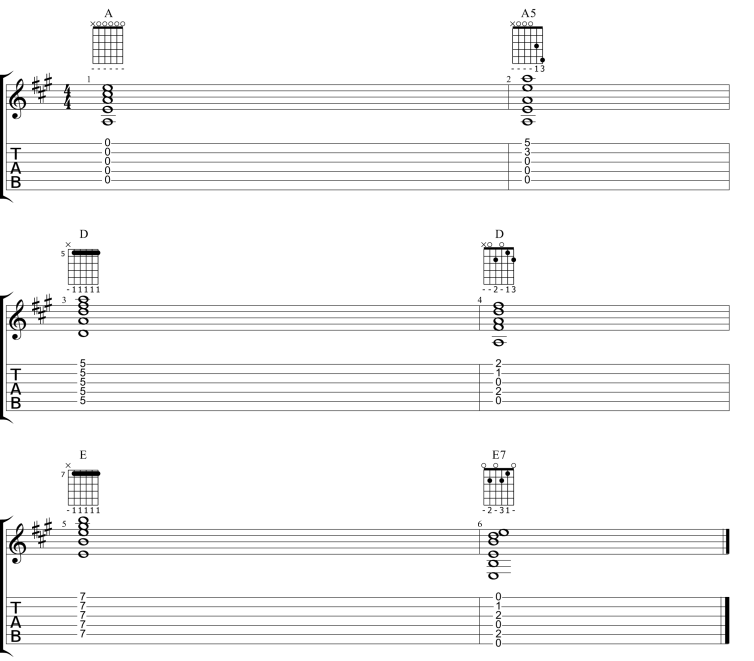 Now we will take a look at some riffs you prbably already know from standard tuning. I chose the same riffs as in the first lesson about Vestapol tuning. You will soon see why…

This variation of the Boogie riff adds the minor seventh:

And this variation of the Boogie riff adds the minor-to-major-third move that’s so typical of the Blues:

The note on the 4th fret could be played as a hammer on.

To play these riffs on the IV (or V) chord simply move them up 5 (or 7) frets like this:

I use a first finger barre on the lower frets for these riffs.

Did you notice something? Spanish Tuning and Vestapol tuning behave VERY similar. Actually you can play most of you riffs and licks in both tunings by simply moving them up or down one string respectively. Why? Let’s take a closer look at the relative tuning of the strings to each other in each of the Tunings:

In Vestapol the strings are tuned to the following intervals (low to high):

In Spanish the strings are tuned to the following intervals (low to high):

If we compare them, we find the following:

That means that any riff from Vestapol that doesn’t involve the high string can be played in Spanish by moving it one string higher.

Any riff from Spanish that doesn’t involve the lowest string can be played in Vestapol by moving it one string lower. Now is that cool or is that cool?

Now please go back and compare the chord shapes for both tunings and see how similar they are.

Here we have a simple turnaround:

And here comes a more complex turnaround, featuring the higher octave that I mentioned in the last example:

Now try to play other riffs you already know from standard tuning and Vestapol tuning in Spanish tuning. Remember that the notes on the low E string, on the A string and on the high e string are still where they were in standard tuning. The D string, the g string and the b string are tuned two halftones higher so all the notes on these three strings must be moved two frets lower. Have fun!

In the next article you’ll learn some great sounding must-know-riffs in Spanish tuning in the style of the Blues master John Lee Hooker.