My original Scarborough Fair arrangement is featured in my new book First Pieces for Classical Guitar which includes twenty rewarding and enjoyable pieces help beginner guitarists develop to an intermediate level. The book comes with tab and audio recordings of the pieces to help make classical guitar accessible for players of any background.

Scarborough Fair is one of the most well-known folk songs ever written. Much of its enduring appeal is due to the folk revival of the 1960s. Paul Simon learnt the song from renowned English folk guitarist Martin Carthy, and Simon & Garfunkel recorded it in 1968.

Like most folk songs and stories, Scarborough Fair has many variations. My Scarborough Fair arrangement consists of a short introduction, followed by two repeats of the melody, then a repeat of the introduction to finish. Several different textures are used to keep the piece interesting. In each section, observe how many notes are struck simultaneously, and whether chords change once per bar, or there is a new chord on each note of the tune.

The opening combines fretted notes higher up the neck with open strings. Shapes like these produce interesting intervals by allowing notes that are close together to ring out simultaneously. This texture is evocative of Celtic harp playing.

Bars five to eight contain the first phrase of the tune. The melody is played using notes found in common open chords. In bar seven, the C Major chord should be held down for the whole bar, with only your first finger being removed to play the F note.

The next phrase pairs the melody notes with a harmony a sixth below. The open string bass notes should be allowed to ring out. Be careful with the arching of your fingers to avoid muting them accidentally, especially in bar eleven where the open string is between the two fretted notes.

Bars seventeen to twenty employ tenth-intervals, as seen in several previous pieces, such as Carulli’s Andantino. The melody will sound smoothest if you avoid using the same finger consecutively when transitioning between notes.

Another harp-inspired moment occurs in bars twenty-three and twenty-four. The melody notes E, C, F and D all ring together, creating a chord known as a cluster.

Treat both pairs of notes in bar twenty-five like a chord shape so they ring together for a thicker sound. Keep your first finger on the high E-string, then use your fourth finger for the chord in bar twenty-six to preserve the momentum.

Once you are able to play the piece at a steady tempo, add some expressive phrasing. A great way to decide where and how this should be done is to sing the song out loud, or listen to it sung (preferably unaccompanied). Note the points in the tune where there is rise or fall in volume, and how the tempo slows down towards the end of each phrase. Replicating these nuances will add a lot to your performance and can make seemingly simple music captivating. 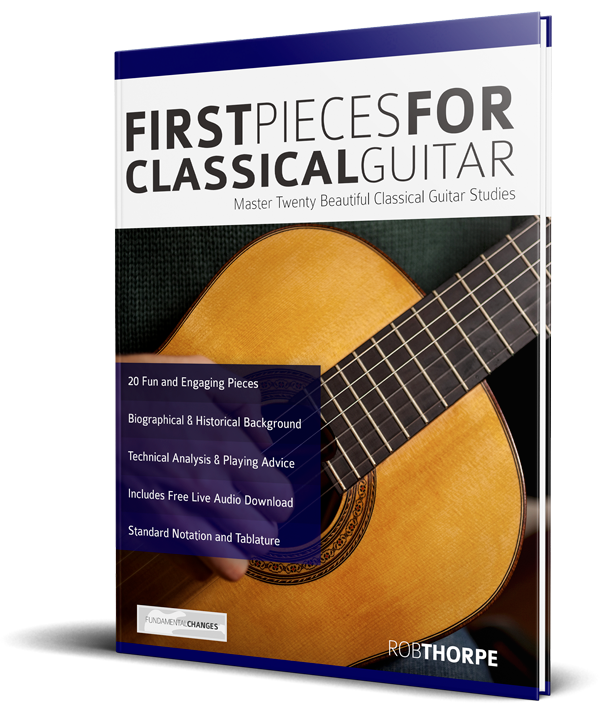 I hope you enjoy playing this Scarborough Fair arrangement. As such a well-known tune, it’s sure to be well-received at open mics and parties!