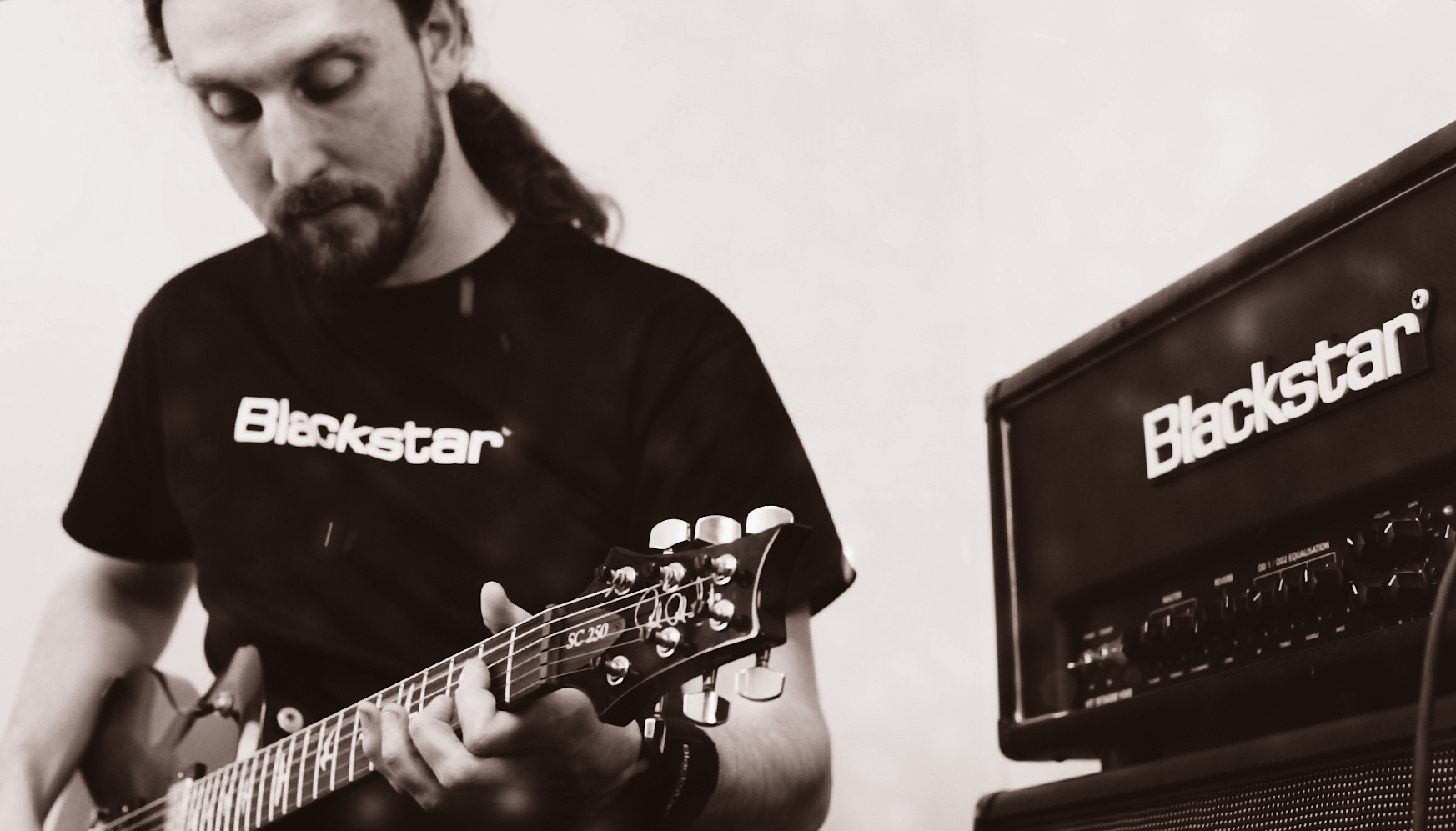 Could you outline the rig you’re using for Cradle of Filth, for the tours and recording?

Weirdly enough, Ashok [Marek “Ashok” Smerda, other Cradle guitarist] and I both stumbled across the Mooerpreamps that came out around a year ago, and bought the one based on the EVH 5150 III. They’re so small they don’t even fit a battery in them. I thought, “Oh my God, these are incredible!” They sound great DI’d andnow we use the Mooer Radar cab simulator too. So, we go from the preamp into the cab simulator, all in two pedals!

Firstly, we go into a Shure GL XD wireless unit, which is also a tuner, so that takes the tuner out the equation, into the Mooer preamp and cab emulator, then that goes straight into the mixing desk and everything goes into the in-ear mix, so everything’s kind of controlled for us by the monitor engineer. It’s just one high-gain tone that stays on for the whole night, which we get from that Mooer preamp, and even when we do a solo, ourfront-of-house sound guy will boost it and put a bit of delay on it.

Around 18 months ago we were using Kempers [high-end profiling amp-modeller] but they belong to our old tour manager, and when he went off with a bigger band, he took them with him. They’re very practical and sound great, but for Cradle of Filth, it’s about £1500 for one tone.

We moved to Mooers partly because my entire rig could fit in my guitar case, which is brilliant because flights, oversize baggage and extra luggage all cost money, and if you’re flying every day that adds up.

Mooer have been really supportive too. Once they’d cottoned onto the fact that we were using them, they sentus a couple of free ones for backups and to try out the latest models.

In the studio it’s a different story. We use heads and cabs and try out all kinds of effects and acoustic guitars. PRS, whose guitars I use, sent me an amp that they’d been working on, the PRS Archon, and they just wanted to know what I thought about it. We ended up using the Archon on pretty much all the rhythm tones and all ofmy lead tones on the last album [Cryptoniana – The Seductiveness of Decay]. I think the speaker cabinet wasa Mesa Boogie 4×12.

For my side of the rhythm tones, because we were double tracking, I used the PRS Archon and then Scott re- amped the same take with an original Peavey 5150. The 5150 is the go-to metal amp for good reason – they’re so good at blending. The PRS, blended with the 5150, creates this huge tone, just from one guitar part.

The Archon is one of the clearest distorted tones I’ve heard. When you play a chord, you can hear every singleindividual note in that chord. The 5150 has that low end and low-mid punch that gets you in your chest when you palm-mute.

You’ve done a lot of theatre work, which is about variety and matching so many requirements. How would you prepare for that?

Sometimes you’re lucky enough that the score tells you what kind of sound is wanted, especially for therockier ones – We Will Rock You, Rock of Ages, Jesus Christ Superstar etc. They do say what tone you need.More traditional scores won’t and you’ve got to piece it together. You should go through this with the musical director at the first rehearsal, or prior to it, and ask what he would like, or get some recordings of the show. It’s just doing my homework really. I’ll make notes of what’s needed and assemble a pedalboard from there.

Over the years I’ve accumulated loads of amps and effects pedals, so, when it comes to cover gigs and musical theatre, I assemble a purpose-built pedalboard for that show. I’ll take out all the unnecessary stuff, just in case anything happens during a show; I’ll take the bare minimum setup. The thing about musical theatre is there’s not much room in an orchestra pit, so you want all the tones in the smallest space. There’s no room for a great big pedalboard. Instead of having an acoustic guitar that’ll take up room on a stand, I’ll usually have an acoustic simulator. It depends how prominent the acoustic part is, but a simulator does a good enough job if it’s just here and there.

The number one rule is that it’s all got to be super-quiet. When it’s in bypass it’s got to be silent. Any hum would go through the front-of-house, and you don’t want anything disrupting the dialogue.

I’d research getting the quietest overdrive pedals to avoid hum. Actually, the Mooer stuff is really good for that as well. I’ve been using Mooer stuff for years for theatre and it has worked really well.

I’m thinking of speaking to Line6 and upgrading to a Helix. I think they’re the way forward, since you can programme everything for each situation and not have to swap pedals in and out. For me, it’s a really exciting time for digital technology because it’s almost caught up with analogue. I wouldn’t say it’s quite there – I still prefer the sound of amps and cabs, and real speakers pushing air – but it’s scary how close it’s got. Once upon a time I wouldn’t have thought of using the little Mooer preamp for Cradle of Filth, not in a million years, butit is really convincing.

Have you used multi-fx in the past, or have you always been into traditional compact pedals?

I’ve usually been that kind of guy to be honest, with the separate pedals. I like the tone and feel of them, even the good-old Boss pedals. People slag them off once they get to a certain level and go for “boutique amps” but I think some Boss pedals are still great. There’s a reason why Zakk Wylde had an SD-1 in his rig for so manyyears. They’re underrated pedals, and affordable.

I lean towards individual stomp-boxes, but have a Line 6 M5. I’ll have all my usual pedals – the wah, overdrives, a couple of modulations – but then there’s always some parts in a show where I need an odd tone for one song, that I’ll use for 10 seconds in the whole set, like for example a Lesley [rotary] cabinet emulatoror something.

I looked at the individual Lesley cabinet emulator and it’s about 400 quid [£], and the M5 was about 90 quid.Line6 get a bad rap, but to my ears it sounded better!

I think tone is a combination of everything. It’s very difficult just to say, “Buy this” and “buy that” and you’ll sound like this. I remember trying an exact replica of Brian May’s rig and was very disappointed to find Isounded like me. I even used a sixpence to play and everything!

That was the moment I realized it’s not a bad thing, actually it’s a good thing, because it doesn’t matter what I play through, I’ll sound like me. Finding the magical combination of guitar, pickups, pick, amp and pedals gets that extra 10% that makes your tone, but I’m still a big believer that 90% of your tone comes from your fingers. 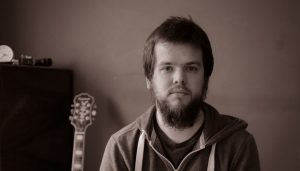 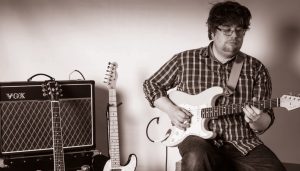 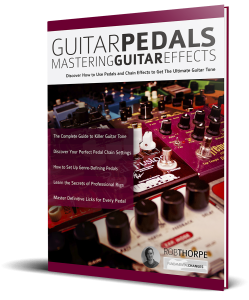