In part two of our series on playing with more expression we looked at incorporating string bending into melodies. This week we’re returning to that subject to develop some more advanced string bending ideas. Normally we’d fret a note and bend up a tone or a semitone to get another pitch. However, in this lesson we’re going to bend to multiple pitches. Sustaining a note while it is bent to different pitches allows us to get a very vocal effect of gliding seamlessly between notes akin to a fretless instrument, a singer or a theremin.

A quick word of warning: The licks here all require you to bend up to at least a minor third (3 frets) and in some places a major third (4 frets). This advanced string bending takes strength and control to pull off. To recap: the bending motion should come from twisting the forearm and wrist, NOT from the individual fingers. Bend with the third finger, supported by the second and first to get the most secure grip, and get that thumb over the top of the neck for more leverage.

Combining this lesson with last week’s look at the volume control can yield very expressive results. If picking, swelling and bending all at once seems to much to juggle, try a volume pedal to delegate the job of volume swelling to your feet.

To hear the full emotional potential of these very expressive advanced string bending ideas listen to Jeff Beck, in particular his haunting performance of Stevie Wonder’s ‘Cause We’ve Ended As Lovers , David Gilmour is also a master of bending melodically and two multiple pitch bend examples are the closing solo from On an Island, and in Another Brick in the Wall, Pt. 2.

To start with, here’s the basic principle we’ll be using laid out in isolation. The first bar starts with a standard whole tone bend from A to B. However, once we’ve reached the B, instead of releasing again, we’ll bend up again even further until we get to a C. Try playing the fretted notes before attempting the bend so you know what notes you’re aiming for and then use your ear to tune them in.

Some of you may have played minor third bends before, but it’s important to stress that here the point is to have the two stage process, both bent pitches clearly audible. It take more control to bend in this way, especially releasing the full bend bit by bit. 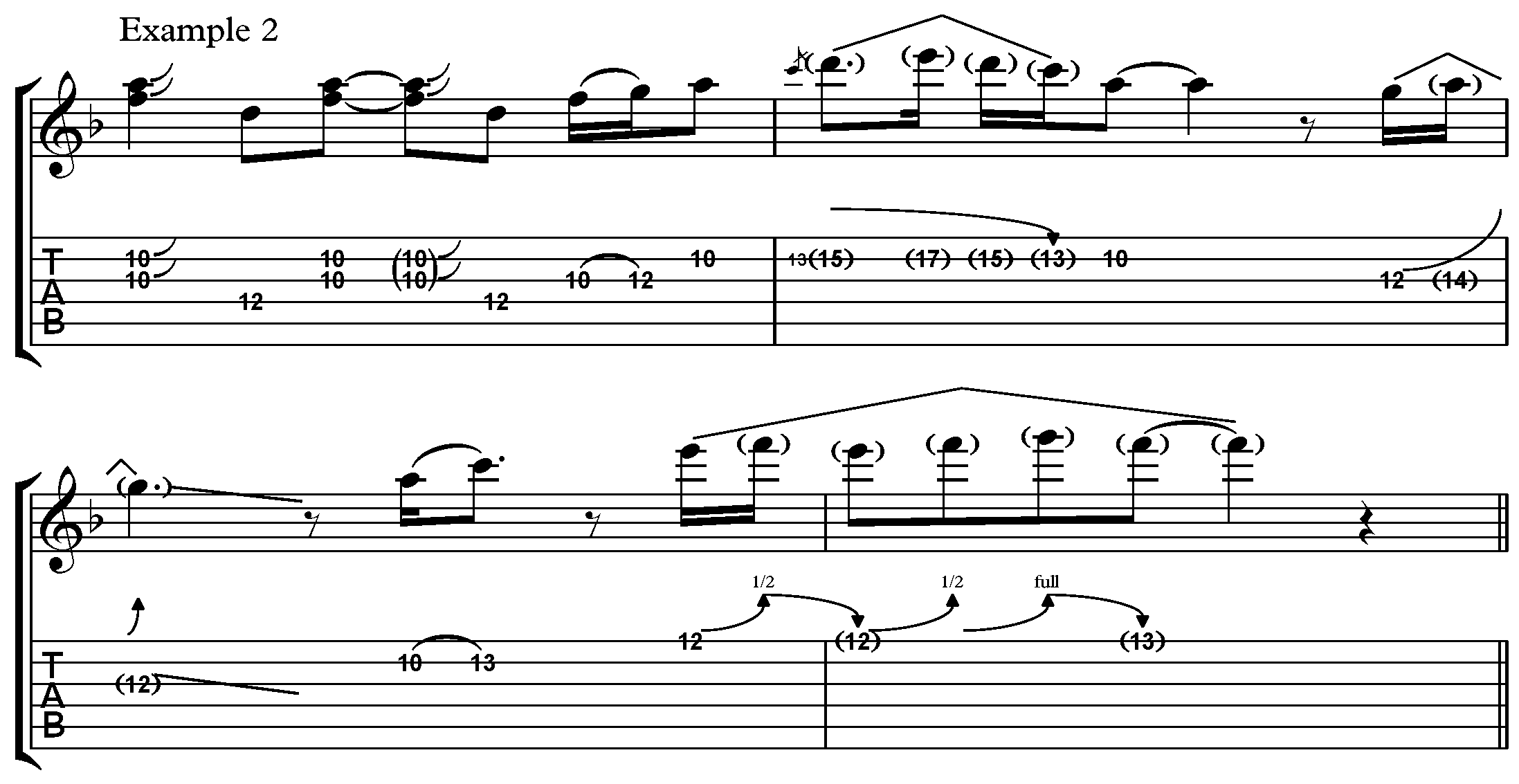 Finally we approach Jeff Beck’s sublime melodic phrasing and include prebends. To perform a pre-bend, the string is bent silently before being picked. This allows the first sound to be a descending gliss rather than always have to be ascending from the starting note.

If you’re unfamiliar with this it can take a bit of practice to develop the muscle memory of bending in-tune without hearing the pitch to guide you. We looked at prebends way back in a column on advanced bending, which touched on a whole host of different bending techniques, check that our here.

To help make the different pitches in the bend more defined, avoid wide or uncontrolled vibrato. Instead keep the vibrato shallow and slow, if you use any at all, to give each pitch clarity and separation.

As has already been said, Jeff Beck is the man for advanced string bending, every electric guitarist should have at least one Beck record. Try Blow by Blow or Jeff Beck’s Guitar Shop. David Gilmour’s track The Blue has a wonderful solo with several multi-pitch bends, and augmented by surprisingly tasteful use of a Whammy pedal too.