In this lesson, we are checking out three guitar licks in the style of the soulful blues-pop sensation, John Mayer. His style is full of beautiful phrasing and passion. Mixing harmonious blues lines, with well written pop songs has made John Mayer one of the most famous modern-day blues guitarists.

Open chords are the most commonly neglected part of rhythm playing. We often become obsessed with Barre Chords, how many extensions and alterations we can use in any given piece of music. John Mayer always shows his superior knowledge of open chords, combining nice voicings with finger-picking. This example revolves around the Dsus2 chord. Suspended (sus) chords are a great way to expand your chord knowledge and can replace either a major or a minor chord, as they possess no 3rd, or minor 3rd.

John Mayer has many influences. His rhythm playing has a strong Hendrix influence. This progression follows a simple pattern that goes between G and C. The double-stop fills between them are the bit to work on. The double stops are based on G Major (over the G chord,) and C major (over the C chord.) I often find that students get stuck for ideas of what to play. Take a simple progression like this, and write out your scales on a scale diagram sheet. Look at the number of single note, and double-stop opportunities, and fit them in at the end of each bar.

Phrasing, phrasing, phrasing! Every note counts in John Mayer’s lead lines. You can hear the passion in everything he plays. This lick combines the main blues essentials you will see in Mayer’s playing. Bends, slides and vibrato form the core of this lick. Try recording example two, and playing example three over it. Alternatively, try to create a one guitar part arrangement of the two. The combination of rhythm and lead playing is a fantastic way to remain creative. 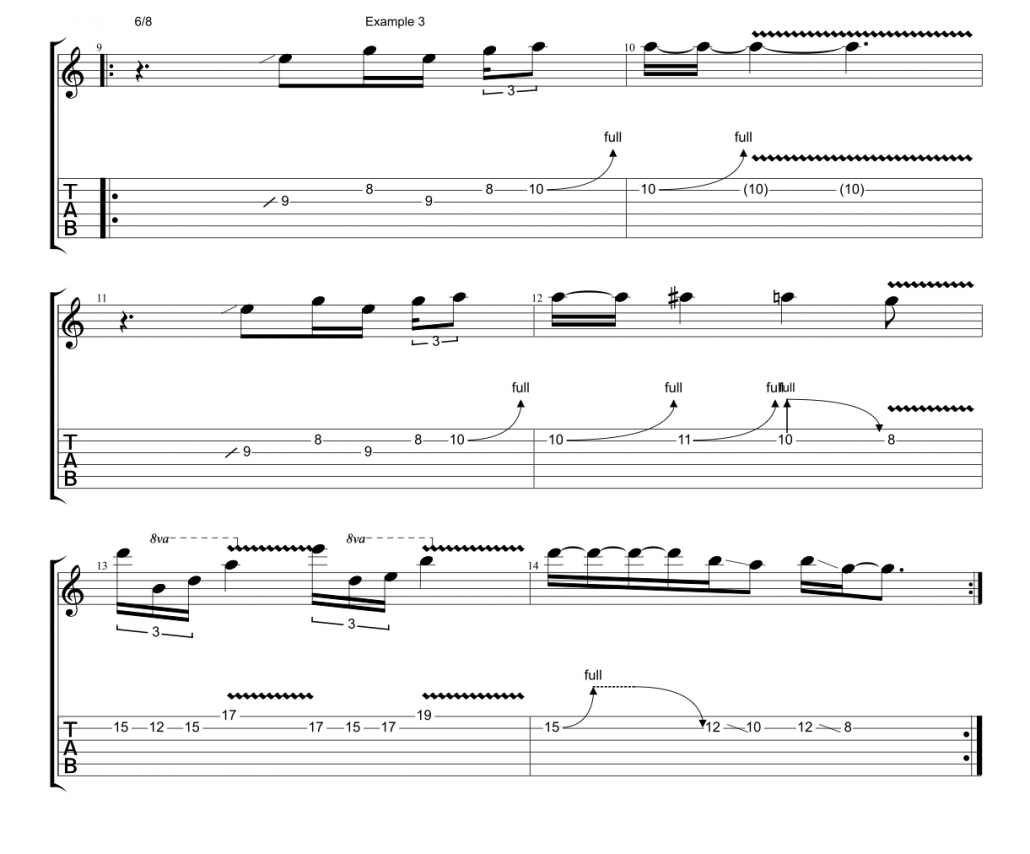 For classic John Mayer style guitar licks, I recommend buying the album “Continuum.” My favourite track on that album being “Gravity.”

Hi everyone, Simon here once again for the awesome Fundamental Changes. Today we’re looking at possibly my favorite musician in the world, Mr. John Mayer. I hope you’re going to enjoy this today, so let’s get to some licks of his just after this.

Example 1 that we just saw there uses some of John Mayer’s open chord goodness. To give you an open chord progression today, the chord that’s kind of in focus today is the Dsus2, which is your open D major without the top string, generally your middle finger, unless you’re playing it at a different way.

That gives you the note of the E on the top string there. Then we’re moving this around, so we bring that note that will be missing there into the G of the 6th string for G add9, then we swap it around D over F sharp A with a little twiddle, back to the Dsus2, E7, G, A, D.

Now, he just really highlights here his knowledge and understanding of open chords. I always say to my students that sometimes with your rhythm playing, take it back to basics. Do you know some really good solid open chord progressions and songs? If not, try a few. Check out tunes like Who Says by John Mayer. That’s a really good one to check out there.

This, hopefully gives you some new ways that you can see that just moving a different root note will move you into new open chord patterns. Let’s get on to Example 2.

Our technique in the style of today is how John Mayer approaches Hendrix-style chords. We’ve got a 2-chord pattern here, going from a G, using the E shape in the 3rd fret to a C, 3rd fret using the A shape. Then we’ve got double stops of 2 notes that fill within the gaps.

I love this idea, because it means you can just have – it doesn’t matter how many chords, but you can fill the gaps with these beautiful sounding double stops. They’re so silky smooth, and something that he does so, so well. Very reminiscent of Hendrix’s as well, but just watch them out and get used to these little patterns and move them into loads of different keys.

Here was the superlick at the end here. I’ve only done it at 1 speed, because it’s fairly slow, otherwise that would take minutes long. We’re up around the G major pentatonic, or you might be more familiar with it as the E minor pentatonic, showing you some silky smooth bends, some nice vibrato, and some slides as well, to create a really melodic pattern.

Obviously John Mayer’s roots is in blues, but he has this sense of phrasing all the time. Every note has purpose, and I want you to have that in your playing as well – Tiny bits of vibrato, up high around the neck, creating singable lines, singable phrase.

Hopefully from these ideas, you can move them into different keys, imagining example 2 the G and the C, record just in those chords, and then try playing this Example 3 over those as well. I hope you’ll get some real mileage out of that. As always, I really hope you’ve got something from this.

If you’ve got anything you’d like to see, please get in touch, I’m open to all ideas, and I love making these videos for you guys, and I’ll speak to you soon.

Hi, thanks for watching this John Mayer licks, tips, and tricks. I really hope you got something from it. Head over to Joseph’s website Fundamental Changes, and check out my YouTube, SDPguitar, for more free guitar lessons and tabs too. I’ll see you soon.